Lytham St Annes Shanty Crew launched their debut CD Northern Shoal at a sell-out concert titled Songs Of The Sea At The School By The Sea on Saturday 14th of October. The concert was held in the school hall at AKS in St Annes (formally Kind Edward School) and was received by an appreciative audience of 250 entertained who were entertained for over 2 hours by the Shanty Crew's mixture of traditional and modern shanties. Although the full amount has to be finalised, they have raised over 1,500 towards the Lytham St Annes Shannon Lifeboat Appeal on this night alone. The concert was attended by the Mayor and Mayoress of Fylde Council, Coun John Singleton JP and Mrs Singleton, and people from a wide area. Singing along with some of the numbers was encouraged and all had a great time going by the comments made as the audience left. AKS generously allowed the use of their hall for the night free of charge, and Ansdell Institute assisted providing refreshments for the interval.

The Lytham St Annes Shanty Crew were formed just over two years ago to help raise money for charity, especially the RNLI. This coincided nicely with the Lytham St Annes RNLI Shannon Appeal who have been the main recipient. So far the ten members have donated over 5,000 to the appeal with more to come as all the profits from their first CD "Northern Shoal" (out now) are to go to the Appeal.

When they appeared at the Annual Lytham Festival in 2016, they were the first act to sell out, so a second night was added. This sold out in days too. This year they appeared in the inaugural Lytham Festival Fringe, and the annual Lytham St Annes Lifeboat Family Fun Day held each year at the ALB House on South Promenade. They have also played at the annual Blackpool Lifeboat Day and also Fleetwood Lifeboat Open Day held at the stations respective boathouses.

Even when they have been rehearsing they have put a collecting bucket out and raised 100s in donations from passers by stopping to listen. They have appeared at the annual Lytham Festival official fringe and the annual Lytham St Annes Lifeboat Family Fun Day held each year at the ALB House on South Promenade as well as other RNLI events. They have also played at the annual Blackpool Lifeboat Day held at that Station s Boathouse.

The Lytham St Annes Shannon Appeal for 275,000 is on target so far for the new boat BARBARA ANNE's arrival due at the end of February 2018. So far 200,000 has been raised but the momentum hopefully will continue to reach the full amount. It will be sad to see the HER MAJESTY THE QUEEN leave the Station but all are looking forward to the arrival of the Shannon. 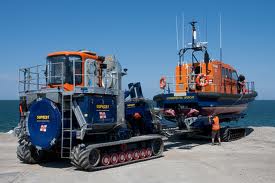 The Lytham St Annes Shanty Crew contributed over 8,000 to the 275,000 appeal, which helped to bring the latest Shannon class lifeboat and Supacat Launch and Recovery Vehicle to Lytham St Annes.

We continue to support Lytham St Annes Lifeboat via their 'Busking Buckets' which are much in evidence during our 'Summer Open Rehearsals' which we present every Monday at Lytham Lifeboat Station from 19:30 to 21:00 hrs between May and August Bank Holidays. We are also proud to support not only our other local lifeboat RNLI lifeboat stations at Blackpool and Fleetwood, but others further afield.

Keep up to date on all our latest news and shenanigans over on our Facebook page.